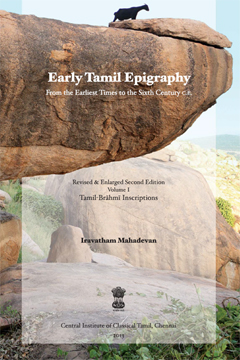 This is Volume I of the revised and enlarged Second Edition of Early Tamil Epigraphy, first published in 2003. The Volume deals with Tamil-Brāhmī stone inscriptions discovered up to 2012. The main feature of the edition is that it is based on fresh in situ delineation and digitisation of the cave inscriptions included in the Corpus.

The work provides a detailed account of the discovery and decipherment of the inscriptions and relates their language and contents to early Tamil literature and society. Tamil-Brāhmī inscriptions on pottery, coins, seals and rings, have also been utilised to present a more complete picture of early Tamil epigraphy. Two new sections deal with Prakrit inscriptions on pottery and other inscribed objects, and Sinhala-Prakrit pottery inscriptions, from Tamilnadu, which bring out the interaction of Tamil-Brāhmī with other contemporary languages and scripts of South India and Sri Lanka.


Back to publications Buy this